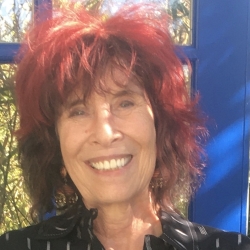 Carel Bertram is an Emerita Professor in the Department of Humanities. She received her MA in Near Eastern Studies at UC Berkeley and her PhD in Art and Architectural History at UCLA. Her field is urban history and historical consciousness in the Islamic world. Dr. Bertram asks, “how do we find out how individuals and groups understood their world?” She answers this question through the lens of the Humanities with historically contextualized studies of cultural production and representation. Her interest in what historical actors produced (art, architecture, literature, poetry, and, especially places) centers on what these meant to their makers and, more importantly, how these meanings changed over time. For instance, Bertram studies manuscripts and their illumination and illustration to investigate what the reader might have known and felt; and she analyzes cities to ascertain how urban space was built, walked, filmed and remembered.  Her work on architecture, especially houses and homes, asks how buildings are used and at times romanticized so that they become iconic.

Some of these ideas formed the core of her book Imagining the Turkish House: Collective Visions of Home, published in 2008 with University of Texas Press. Her book was subsequently translated into Turkish and published by Iletisim Yayincilik in 2012.  Subsequently, Prof. Bertram researched the quest for connection to the past among members of the Armenian Diaspora who made pilgrimages to the lost homes of their families in Anatolia.  Her book A House in the Homeland: Armenian Pilgrimages to Places of Ancestral Memory appeared with Stanford University Press in 2022.