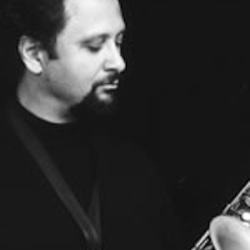 Hafez Modirzadeh is a Professor of Creative/World Music. His work has focused on cross-cultural music, as well as jazz and ethnomusicology. Both an NEA Jazz Fellow and Senior Fulbright Scholar, his Grammy-nominated work on saxophones can be heard on Pi Recordings, while his published research can be found in Black Music Research, Leonardo, Critical Studies in Improvisation, and Popular Music Studies. Modirzadeh has appeared from the Berlin to Monterey Jazz Festivals and has performed with such artists as Omar Sosa, Don Cherry, Peter Apfelbaum, Steve Lacy, Fred Ho, Zakir Hussein, Oliver Lake, as well as many others on the local San Francisco creative music scene.

Dr. Modirzadeh received an M.A. from UCLA (’86) and a Ph.D. from Wesleyan (’92), both in ethnomusicology, and he continues to develop an interdisciplinary musical approach he calls “Chromodal Discourse”. From Tehran to Brown Universities, Chromodal theory has been presented within both musical and scientific academic arenas, most recently acknowledged as a formal subject for the Doctorate of Musical Arts by the University of Madison, Wisconsin (Frey 2002). Through the 90s, he coordinated San Jose State University’s Improvised Music Studies Program until joining the music faculty at San Francisco State in 1998 to develop programs in both jazz and world music and dance. In 2004-05, Dr. Modirzadeh’s SF State sabbatical to Andalucia, in Southern Spain, led to a 2006 Fulbright to lecture on Flamenco and Jazz at the University of Granada, which culminated in his 2007 CD release, “Bemsha Alegria”, released on Disques Chromodal.

Dr. Modirzadeh's composed works have been supported by two National Endowment for the Arts Fellowships (’89, ’91), Other Minds (1998), and the Djerassi Composer's Residency Program (2003), while his educational outreach has been repeatedly funded by California Arts Council Artist in Residency (1996-99).