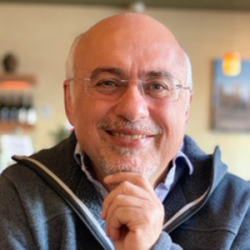 Mohammad Azadpur is Professor of Philosophy at San Francisco State University. He received his PhD from the University of Virginia (1999) and joined the faculty at SFSU after post-doctoral work at John Hopkins University (1999-2002).

Azadpur's latest research project engages analytic neo-Hegelians (Sellars and McDowell) and Islamic Peripatetics (mainly Avicenna) in rethinking foundationalism and original intentionality.  His book in this area is titled Analytic Philosophy and Avicenna: Knowing the Unknown (Routledge 2020).  Another line of research explores the primacy of ethics in the activity of philosophy, from Ancient Greek philosophy to twentieth century figures such as Heidegger, Hadot and Foucault. On this topic he has pubished Reason Unbound: On Spiritual Practice in Islamic Peripatetic Philosophy (SUNY Press 2011). Within the MEIS framework, he has taught courses on Islamic Philosophy and Mysticism, and Islamic Political Philosophy.

Additional information can be found on Professor Azadpur's webpage.